The world-class sports facilities of the Rio 2016 Olympics will not lie unused, but help transform the city into a “new neighbourhood”

When the Organising Committee for the Rio 2016 Olympic and Paralympic Games originally presented the sustainability management plan, it hoped to not only deliver world-class sporting events, but also to lay the foundation for a lasting legacy for the city of Rio de Janeiro. The stated goal, said Rio 2016 President Carlos Arthur Nuzman, was to “integrate sustainability in all organisational processes”, and set “an example of good practice for society as a whole”.

Design with the future in mind

So, when it was commissioned to plan the Barra Olympic Park, AECOM, the multinational civil engineering firm, designed facilities that could easily be rebuilt and repurposed after the games. Using modular construction techniques, the 11 new venues, termed “nomadic infrastructure” by Rio 2016 President Carlos Arthur Nuzman, could be simply dismantled and re-assembled into community facilities that would be used for many years to come.

“Many of the sports venues [at the 2016 Rio Olympics] are reusable, temporary structures that will be transformed for other purposes after the Games,” says Peter Ayres, director of Buildings and Places, and Sports Business Unit Leader for AECOM. “Not only is this approach cheaper, faster, and more sustainable than traditional construction techniques, it will also create much-needed community facilities for the city.”

“Beyond gold, silver, and bronze, steel was the most important metal used at the games this year in Rio.”

“This,” adds Rio de Janeiro Mayor Eduardo Paes, “was decided as an intelligent way to reuse that space so that it does not become a ‘white elephant’ after the games.” Key to that masterplan was steel.

Beyond gold, silver, and bronze, Olympic organizers stressed that steel was the most important metal used at the games this year in Rio. “In the past,” says Paes, “these temporary arenas are destroyed after the Games, but [at the Rio Olympics] what we have already done with these projects [is] all the steel material and concrete will serve to build lasting infrastructure.”

The way steel was used was integral to the construction, breakdown, and reconfiguration of the park’s venues. “[The sports venues’] highly standardised designs were based on modular, stacked and repeated bolted steel structures to ease dismantling and reassembly,” continues Ayres, whose team numbered 50 people at its peak, and who worked closely with its partners at Rio’s Municipal Olympic Company (EOM). The durable and recyclable nature of steel meant that the buildings constructed at Rio could be taken down and reused again and again.

Constructed using precast steel stairs and ramps, and a roof structure designed to include steel beams and standard-sized tiles, the 12,000-seat Future Arena is one of the buildings that will be dismantled following the Olympics and Paralympics and transformed into a state-of-the-art learning facility. This facility will accommodate 2,000 students from four state-run schools in Rio de Janeiro.

Other existing facilities, such as the Maria Lenk Aquatics Centre, will be remodelled rather than demolished, and complemented by a suite of new permanent venues, which will be reused for regional and international aquatic competitions after the Games.

A steel future for Rio

“The [Rio] masterplan covers a 20-year period, encompassing three distinct phases: preparation for the event; a transitional phase; and the long-term legacy,” Ayres says. “All phases were planned in parallel to ensure the eventual legacy was considered from the outset.”

“These are the Games of transformation that will change the city [of Rio],” says EOM President Joaquim Monteiro. “We did not prepare Rio for the Games, we transformed the city of Rio itself.”

Take a look at the infrastructure the Games brought to Rio… 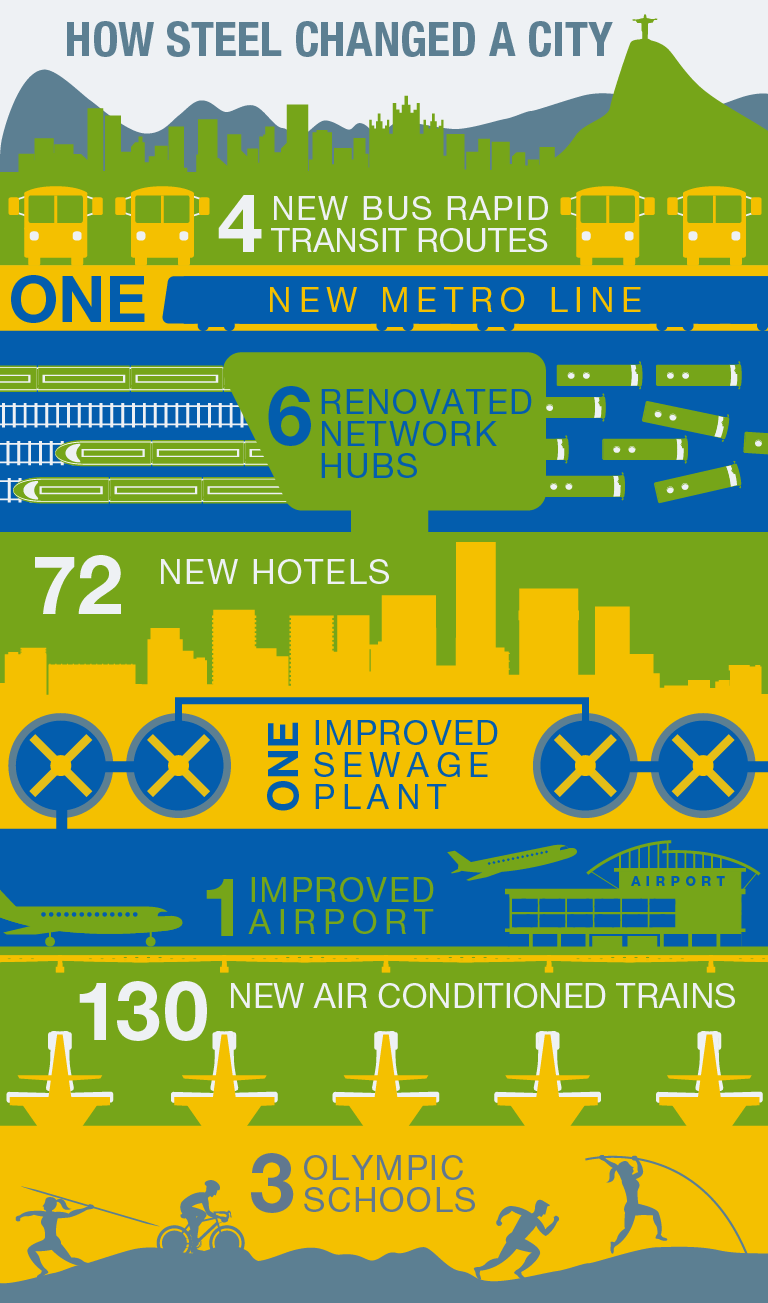