Zaha Hadid Architects’ new 207-metre Beijing skyscraper, Leeza Soho, features a twisting, steel-formed atrium space, which will be the tallest in the world once completed

“We didn’t set out to break records with Leeza Soho,” says Satoshi Ohashi, director of Zaha Hadid Architects. “As with all our projects, the building was designed in response to site conditions.”

The architect practice was set up in China in 2008, and has since been responsible for a number of large-scale commercial buildings. Leeza Soho is the latest of four projects for developer Soho China, which includes two others in Beijing.

“Leeza Soho is a commercial building, with 45-floors of office space and four floors of basement underneath – two for parking and the other two for shopping,” explains project director Satoshi. “There’s a direct link from the subway station to these lower levels, which makes it very convenient for office workers.” 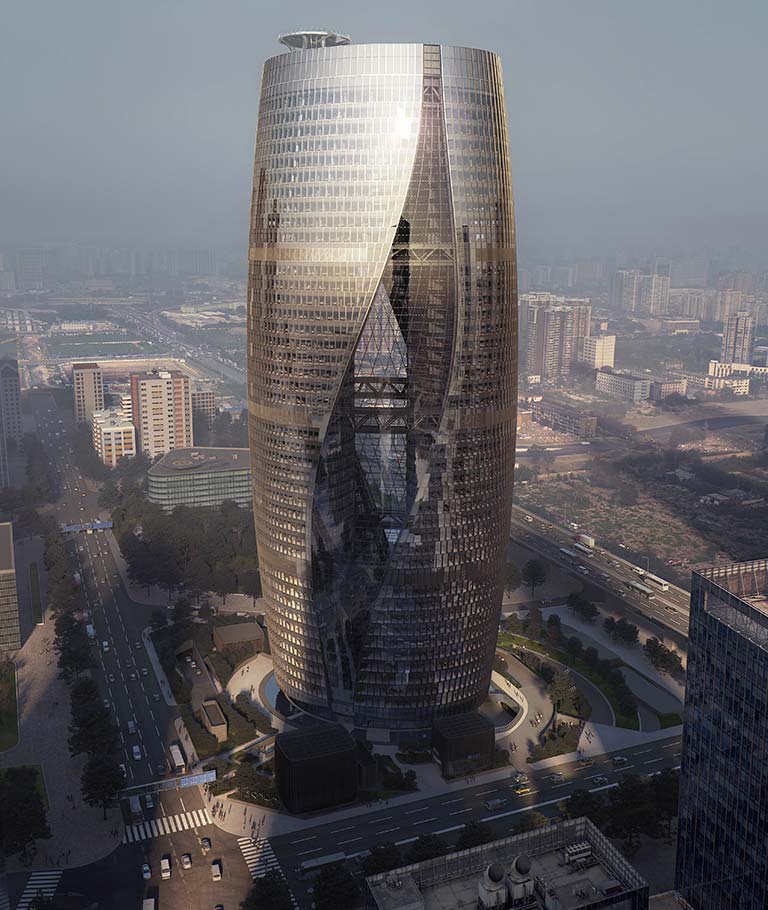 Designed by Zaha Hadid before her death in March 2016, the skyscraper is currently being built in the Lize financial business district in southwest Beijing and will have a combined floor area of 172,800m2. Constructed over a subway tunnel which runs diagonally across the site, the tower has been designed in two distinct halves connected by an atrium which – at 190 metres – is destined to take the record as the world’s tallest.

“The tower really pushes the possibilities of construction, design and engineering, despite its challenging site conditions, and it is steel which creates these virtually limitless possibilities,” Satoshi explains.

Engineering such a unique, contemporary tower would have been impossible without steel. Apart from a core which contains the elevators, the entire remaining structure is framed in steel, which stabilises the building and forms its gently twisting elliptical shape.

“As Beijing is extending its infrastructure, new subway systems are being built, and our client’s site stands above the intersection of lines 14 and 16. We literally had to span the tunnel by splitting the tower in half, so that the foundations wouldn’t affect the subway. The most elegant way to unify these two halves was with a central atrium, which will become a new public space for the city.”

“The tower really pushes the possibilities of construction, design and engineering, despite its challenging site conditions, and it is steel which creates these virtually limitless possibilities”

The footplate of the tower tapers to enable the required ratio of green space and access roads on the site, with parks and plazas surrounding the base. The building then becomes wider in the middle, and tapers again at the top. As the tower rises, the diagonal axis defined by the subway tunnel is re-aligned by twisting the atrium through 45 degrees, allowing panoramic views of the city and natural light to enter at all levels.

“In many office buildings you step out of the elevator into a black corridor, but in this case you’re in a light-filled space which reduces the need for artificial light,” says Satoshi.

A double-insulated curtain wall system of low-e glass forms the skyscraper’s façade, and the glazing units on each floor are stepped at an angle, reminiscent of fish scales in appearance. These have been designed to aid ventilation, and help to maintain a comfortable indoor temperature to combat the extreme weather conditions in Beijing. 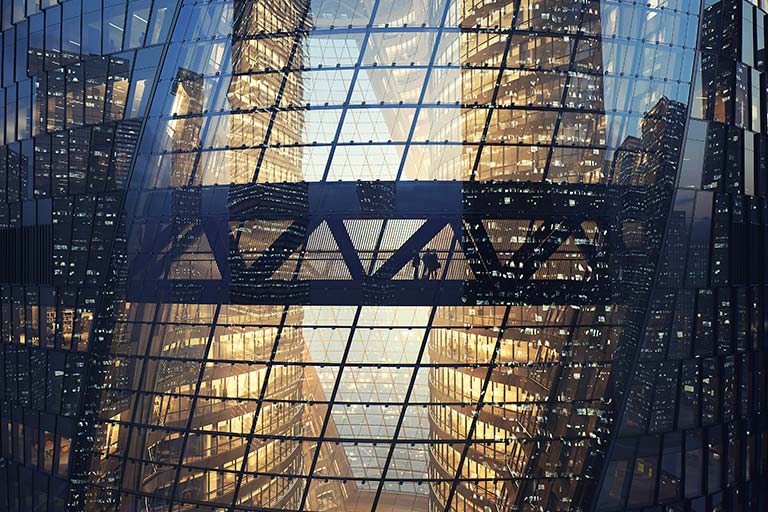 “Sustainability was key to the design, and we are targeting LEED Gold certification,” says Satoshi. An advanced 3D BIM energy management system will monitor energy efficiency and environmental control, integrating such factors as heat-recovery from exhaust air, lighting, and water-collection for grey water flushing and landscape irrigation.

“All our projects in China are on a huge scale, but are accomplished in a relatively short time,” says Satoshi. “Leeza Soho is a three-year project, due to be completed in 2018, and we already have more than half of the steelwork in place, with the remaining steel due to be finished later this year. The speed and scale of these projects is a big challenge.

“The second challenge is the technical making of these huge structures. For this project the geometry of the exterior cladding is complex, because of the gradually stepped windows, which create texture. Behind the cladding the steelwork needs to be very accurate, and its fabrication, welding and sequence of construction has to be carefully coordinated and controlled.”

Satoshi knew and collaborated with Zaha Hadid for more than thirty years before her untimely death, aged 65. Known as ‘queen of the curve’ Zaha relied heavily on steel to facilitate her ambitious designs.

“In the early days there were no computers, and everything was still drawn by hand,” he says. “Of course, now we use 3D tools that allow us to design and model these geometries, which can be fabricated in steel very accurately.

“We have a responsibility to complete Leeza Soho to the standard Zaha would have expected.”