Around 9 in 10 Icelandic households now harness the power of geothermal energy. The rest of the world is starting to take note

Bubbling below the Earth’s surface, the explosive geysers that warm the glacial-tinted Blue Lagoon in Iceland attract millions of tourists each year, all hoping to take a dip in this environmentally-powered hot tub. But these sulphurous chemical reactions aren’t just a simple tourist attraction – geothermal now accounts for 66% of Iceland’s primary energy use, with its largest plant located in the Hengill volcano.

However, outside of the land of fire and ice, only a handful of other regions such as China, Japan and Kenya, are beginning to beginning to integrate this renewable energy source into their grids. According to the International Energy Agency, in 2016, the worldwide installed geothermal capacity was 12.7 gigawatts, but this has the potential to reach 1,400 terawatt hours per year by 2050. 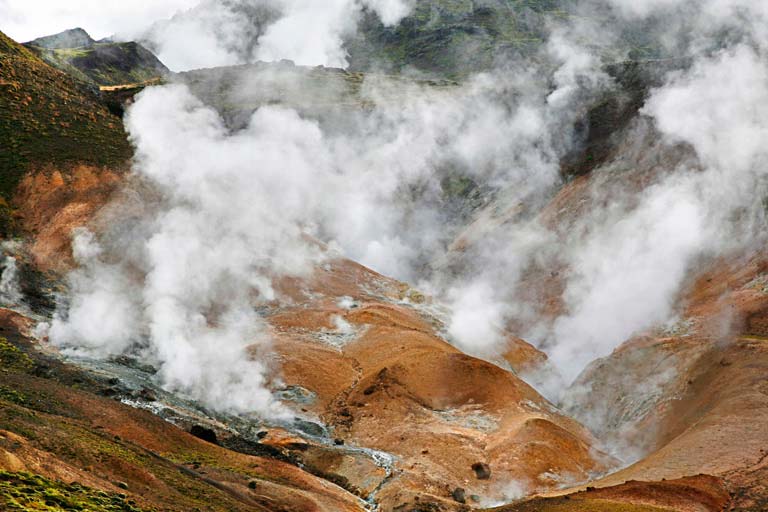 Geothermal heat is collected via huge ground source heat pumps (GSHP), recovering the heat that naturally occurs deep underground. Pumps manufactured from durable, stainless steel components are inserted into two wells drilled into the Earth. These pumps only require a ground temperature of 10-15 °C to generate heat, meaning they are able to operate in mild climates.

One GSHP pumps water directly into a porous, heated area of rock, while the other transports it back to the surface. Here, the hot water is extracted and distributed to buildings that require heat.

Generating geothermal energy utilises a similar process, except that plants use the steam from the hot water to drive turbines linked to electricity generators. These installations require greater surface temperature differences to generate enough steam for large-scale energy generation. This means they must be sited in areas of high volcanic activity.

At the heart of this powerful technology lies steel. The material is integral to the safe and efficient functioning of geothermal plants due to its strength and durability. Dissolved carbon dioxide, hydrogen sulphide, ammonia and chloride are all present during the geothermal process, which when exposed to the majority of metals cause corrosion and destroy components ­– such as valves, filters and piping – over time.

Geothermal is an attractive complement to nuclear, fossil and intermittent forms of renewable energy production, such as wind and solar, which are dependent on the weather

Steel, along with nickel and titanium alloys, are selected for their resistance to pitting and cracking, with thermally treated and ferric stainless steels with a low carbon content being the most resistant to corrosion overall, making this technology possible.

As well as the US, which houses the 1,520 megawatt Geyser Complex, the world’s largest geothermal installation, the technology is also increasingly in Asia, with frequent new plant openings in China, Indonesia and Japan.

A notable uptake in geothermal energy in Japan has seen the construction of new plants such as the Wasabizawa Geothermal Power Plant, set for completion in 2019. This is due in part to the Japanese government’s growing support for geothermal energy production, as it seeks alternatives to nuclear power plant construction.

Geothermal represents an attractive complement to nuclear, fossil and intermittent forms of renewable energy production, such as wind and solar, which are dependent on the weather, and contributes to keeping global temperature increases below the 2 degrees Celsius outlined in the UNFCCC’s Paris Agreement.

Expanding electricity access across sub-Saharan Africa is a mammoth engineering task that requires significant investment and a rethinking of what energy access means.

With sustainable steel increasingly crucial to meeting the world’s climate targets, manufacturers are turning to wind power to decarbonise production.

As part of its hosting of the Beijing 2022 Olympics, China has been investing heavily in winter sports facilities, that include regenerated industrial sites and clean energy.