Noor power station in Morocco is the largest concentrated solar power plant on the planet and uses molten salt storage to produce electricity at night.

Known as the gateway to the Sahara, the city of Ouarzazate is located in the Agadir district of southern Morocco, where the region has some of the highest amounts of sunlight in the world – up to 2635 kWh/m2 annually.

A few kilometres north of the city a dazzling ring made from hundreds of thousands of mirrored surfaces make up a sprawling, 2,500-hectare solar power plant. Called Noor after the Arabic word for ‘light’, the gigantic solar complex allows Morocco to provide nearly half of its energy from renewable sources.

Made up of three distinct facilities, Noor I, Noor II and Noor III, the site is able to power more than a million homes and is estimated to save 760,000 tonnes of carbon emissions every year.

The Noor I site alone features 537,000 parabolic mirrors that are controlled by computers so that they constantly face the sun. These mirrors focus the sun’s rays, heating a special thermal oil that runs through stainless steel pipes throughout the facility. This synthetic oil, which can be heated to around 390°C, travels to the central power plant where it produces steam to drive the main turbine and generate electricity.

While the scale and output of Noor is impressive, it is the third and most recent power plant to come online that represents a significant technological leap that could herald a bright future for sustainable energy generation.

Storing sunshine with steel and salt

The facility’s solar thermal power plants convert energy from the sun into electricity, but the Noor III complex combines its solar power tower with a central receiver that super heats molten salts to more than 500°C.

These molten salts can store heat and allow the plant to produce power at full capacity even during hours of darkness. For this to work, huge quantities of these special salts, which are a mixture of potassium and sodium nitrate, are held in massive steel tanks. 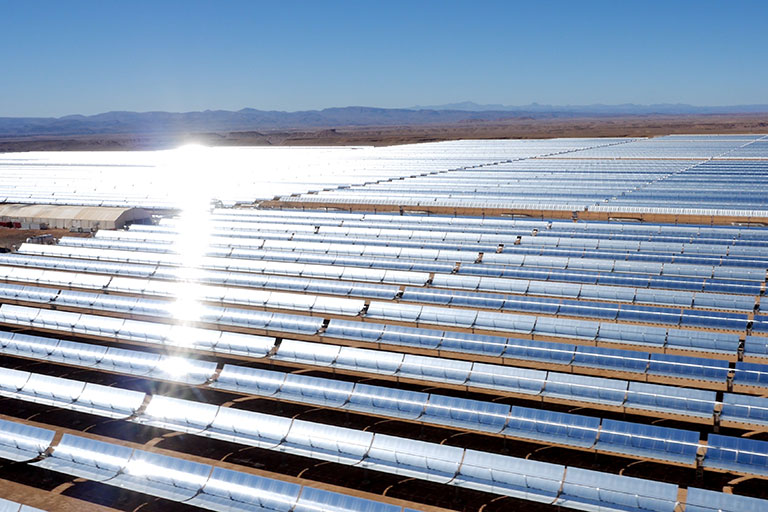 Special grade stainless steel is used throughout the site’s heat exchangers, pipework, generators and energy storage facilityEach of the 19400m³ tanks is made from specialised UR™ 347 stainless steel grade. Due to the highly corrosive nature of the salts contained within, it would be impossible to operate this innovative heat storage method without this niobium-stabilised austenitic steel.

Steel underpins the entire facility as it was used for the production of the heat exchangers, steam generators, high temperature pipes and molten salt storage tanks. This is due to its incredible corrosion resistance, combined with its flexibility of use as this special grade can be easily formed and welded.

With the molten salt storage tanks able to provide enough heat to maintain operation of the plant for seven hours after dark, the Noor complex is able to provide 24-hour energy and represents a game changer for solar as part of the future renewable energy mix.

With countries in the ‘sunbelt’ that stretches 40 degrees north and south of the equator investing heavily in solar power, Noor represents a vision of the future. A future where glistening steel mega structures are able to renewably power entire regions round the clock.

As the world transitions to more sustainable energy sources, using steel-armoured cables to connect to areas of high sun activity could be the key to a shared, solar-powered future.

Padma Bridge in Bangladesh is longest spanning the Ganges

The 6km-long steel-built Padma Bridge is a game-changer for Bangladesh, connecting 21 southwestern districts to the capital of Dhaka and boosting the country’s economy.