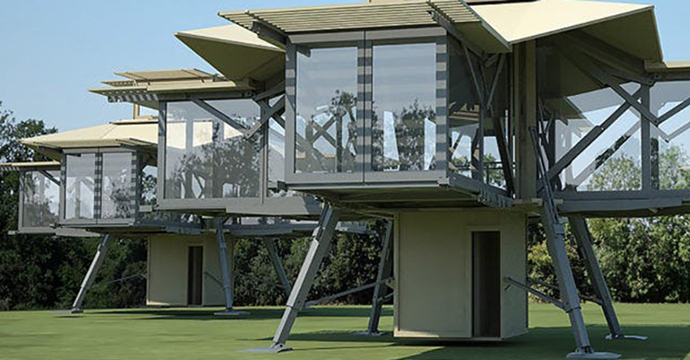 Using traditional lever engineering and modern steel technologies, British firm Ten Fold Engineering has developed buildings that can be transported on the back of a lorry and put up in a mere 10 minutes.

The unfolding structures, which use 19th century lever engineering but with the advantages of modern high-strength and resistant steel, work on a system of counterbalanced linkages, meaning there’s no need for a central motor. Simply pressing a button allows the building to fully assemble into around three times its transportable size, with separate ‘pods’ or rooms, and even pre-installed furniture.

Ten Fold’s founder and CEO David Martyn, says he was inspired to create these transportable buildings as a response to Britain’s housing crisis, with many younger people unable to get on the property ladder because of the price of land.

He says: “The problem we’ve got today is that the young can’t afford to buy anything and the older people can’t afford to trade down. So, the idea of taking the building away from the land – that represents a saving of about 30 percent. My argument is that there’s lots of land out there and you could be building new things.”

From brownfield sites, to car parks, Ten Fold claims that these transportable homes – which cost around £100,000 – are structurally sound enough to be put up anywhere, with no foundations required. The steel used in their construction means they are more solid, reliable and longer-lasting than caravans and other portable buildings.

“This is the first new bit of lever engineering in many hundreds of years. That is a hugely positive step. It’s the ultimate bit of Victorian engineering but with the modern advantages of steel.”

To make them fully mobile, the buildings can use atmospheric moisture harvesting technology to condense water vapour in the air into drinking water. Martyn also says that the units can have internal, pre-plumbed pods or pods can be bolted onto the outside and stacked – like shipping containers – to make larger structures. “The idea is that the technology is modular so you can fit it to your needs,” he says.

Aside from housing, Ten Fold says this technology has a huge range of applications and has already developed a number of other structures, from pop-up shops and tiered seating for stadiums, to portable medical centres and emergency housing for victims of natural disasters.

Martyn says: “To have these buildings, you can respond to the challenges we have such as not enough hospital beds or not being able to house your own people when one block of flats catches fire.”

A factory-built ‘block’ currently takes around a week to construct, giving it a huge advantage over traditional housing, as they’re not beholden to the weather like traditional building processes and do not require wet trades such as plaster and paint, all of which slow the process down.

Martyn, for one, has high hopes for the technology, saying it is a huge step forward in power-free, modern construction methods that will be needed in the future. He says: “This is the first new bit of lever engineering in many hundreds of years. That is a hugely positive step. It’s the ultimate bit of Victorian engineering but with the modern advantages of steel.”