The UK is home to some of the world’s most famous festivals. Music lovers trek from across the globe to attend the likes of Glastonbury, Reading and Leeds. But British festivals are becoming notorious for a whole different reason; the vast clean-up operations that take place once the fun is over.

After Glastonbury 2015, it took 800 rubbish collectors six weeks to clear up an estimated 1,650 tonnes of waste and restore the 1,100 acres to working farmland. With festival founder Michael Eavis committed to creating a festival that is environmentally sound, it became clear that something needed to be done.

Eavis first began the scheme to introduce reusable steel cups to his festival three years ago. He was expanding the scope of his “Love The Farm, Leave No Trace” pledge, which champions sustainable festival attendance, while also looking for a way to support the British steel industry.

It’s green, it’s reusable and it sold out in just 48 hours.

“Everybody said we couldn’t do it with something on the scale of Glastonbury and it has been a major fight to get this scheme off the ground,” says Lucy Smith, Glastonbury’s Green Initiatives and Sustainability Coordinator. “We’ve dealt with everything from weights and measures to crushability tests.”

The steel cup has been specially designed to be non-aerodynamic, to minimise injuries from throwing, and is made of 90% recycled material. It is highly hygienic, due to stainless steel’s lack of breaks or pores that could harbour germs or dirt, as well as its resistance to physical impacts and corrosion. On top of this, it’s green, it’s reusable and it sold out in just 48 hours.

Standing just 13cm high and 9cm rim-to-rim, the Glastonbury stainless steel pint glass has been designed by UK bottle company Glogg World Ltd to be a lightweight and durable drinking vessel. It weighs just 116g, is made of certified 304L food grade stainless steel and can be carried on a handy lanyard around the neck.

The cups were made by APS Metal Pressing in Birmingham. High quality stainless steel was supplied by Sheffield-based steel company Outokumpu, and transported to Birmingham where it was shaped on a press previously used for Land Rover parts. When the final cup was completed, 20,000 were shipped to the festival site and put on sale at the 10 major bars for a refundable deposit of £5.

Glogg and Glastonbury Festival are deploying the steel pint again in 2017 and the manufacturer is also in discussion with other organisations about rolling the cup out to a wider audience.

What difference will they make? 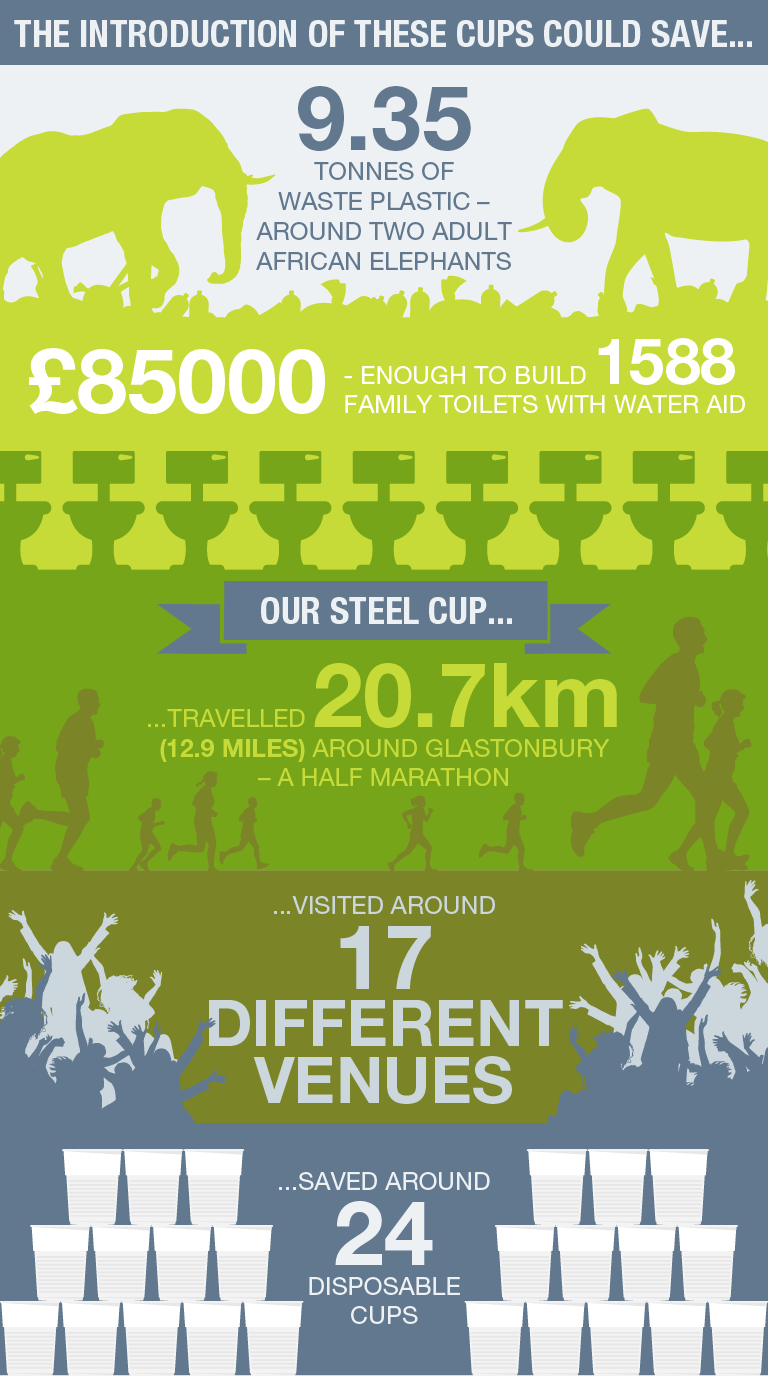