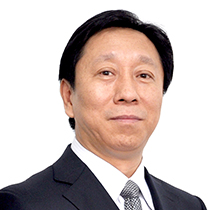 Although our material is 100% and infinitely recyclable, and the base of so many technologies from wind turbines to solar panels that enable a more sustainable future, worldsteel estimates that the steel industry accounts for between 7 – 9% of total global carbon emissions.

Like other steel producers around the world, we at HBIS recognise that the steel industry’s contributions to climate change are under increasingly intense scrutiny from our customers, the communities in which we operate, and our governments. Quite rightly so in my view, and it is with not inconsiderable pride that I see the industry as a whole accelerating its efforts to mitigate our impact.

China is the largest steel producing country in the world by some distance, so what happens in the Chinese steel industry has important ramifications for the industry everywhere, including with respect to climate change.

In September 2020, at the 75th Session of the United Nations General Assembly, Chinese President XI Jinping announced China‘s intention to see its carbon emissions peak in 2030 and for the country as a whole to achieve carbon neutrality by 2060. This clearly puts pressure on HBIS and others, but we are equal to the challenge and indeed welcome it.

According to Guidance on Promoting the Implementation of Ultra-Low Emissions in the Iron and Steel Industry, a document jointly published by five Chinese government departments, over 80% of Chinese steelmaking capacity should be compliant with these stringent regulations covering all production processes by the end of 2025. With Chinese capacity of around 1.15 billion tonnes according to the OECD, this will be a great accomplishment for the steel industry as a whole.

As such, HBIS has formulated a series of measures in the areas of energy structure innovation, process innovation and material performance innovation. We are building China’s first hydrogen DRI demonstration plant in HBIS XuanSteel, Zhangjiakou City, Hebei province. The first phase of the project, due to be completed by the end of 2021, will see the site have the capacity to produce 0.6 million tonnes of iron per annum using hydrogen sequestered from coke ovens at HBIS’ integrated sites elsewhere in Hebei province.

The second phase will see the site expand so as to be capable of producing a further 0.6 million tonnes of iron per annum through the electrolysis of water, the electricity for which will be produced from 100% renewable souces. HBIS will take hydrogen metallurgy as the breakthrough point and build a total annual capacity of 3.6 million tons of hydrogen-based iron during the 14th Five-Year Plan period to provide clean and high-quality raw materials for domestic electric furnaces and advance our industrial upgrading and sustainable development.

There is clearly a long way for the industry to go, but we at HBIS along with other steel producers in China and elsewhere around the world are striving with a new momentum to make sure that the sustainability credentials of both our industry and our products will be unparalleled in the 21st century.

Further details on HBIS’ activities can be found in the attached presentation and on their website. Photos of HBIS’ Tangsteel site are available to view and download at worldsteel.org/images