Quonset Huts, developed for the US Navy during the Second World War, have been repurposed to offer stylish and affordable accommodation in a city crying out for inspiration

The decaying factories and collapsing ballrooms of the American city of Detroit, Michigan, have become so frequently photographed as to become clichéd. A large number of people have heard how Motown’s population tumbled 1.1m from a high point in the 1950s. Back then, with its 1.8m residents, it was the US’ fifth largest city. Now it is the 23rd largest.

But that trend could now be slowly changing. A new, tentative vision of renewal is appearing on some of the vast swathes of devalued land, with artists and other creative residents taking up the offer of low-cost accommodation.

Among the most recent and most celebrated of these developments is True North. It comprises eight ‘Quonset huts’ in a design by Los Angeles-based architect, EC3. Inspired by British World War I Nissen huts, some 170-190,000 of these steel Quonset structures were made for the US Navy throughout World War II.  In construction, they are half a tube, some on flat corrugated sheeting, hanging from a steel frame. Originally, the panels were lapped and mounted to wood purlins with a core layer of paper insulation.

Cheap and easy to erect, the prefabricated nature of the units make them ideal for an area where capital investment is hard to come by. The Quonset huts were designed to be shipped around the field of battle and assembled without skilled labour. They were easily installed on a 7,000 sq ft (2,100 sq m) development three miles from Detroit’s downtown district. 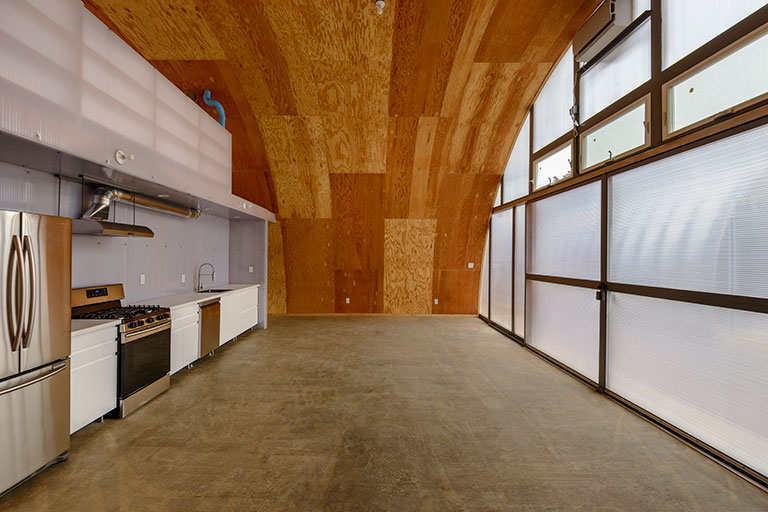 A new form of Quonset hut

These huts have been upgraded from their humble origins, needing more than a burnished industrial finish to appeal to a professional clientele. The huts vary in height, with some reaching a palatial 30ft (9.1m) high.

As the initial design intended, the huts are highly adaptable. “They’re structures and homes where residents can create their own experiences,” says True North project leader, Philip Kafka of developer Prince Concepts in conversation with local publication, Detroit Curbed.

Steel had been an ideal material for what he called Detroit’s “very specific sensibility”. The steel design makes the dwellings roomy: “We were looking for an affordable purchase of two walls and a roof,” he said. “We call it ‘affordable volume.’ The steel structure is actually very beautiful, especially when you are inside it.” 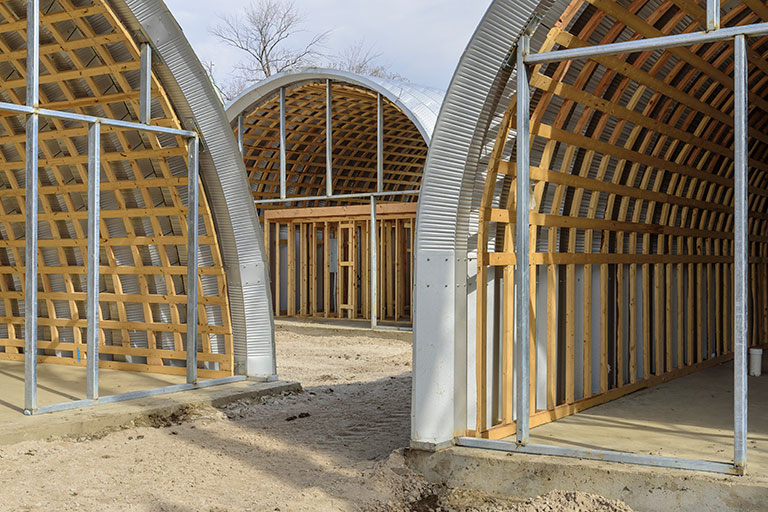 The concrete floors include radial heating and the ends of the huts gain an insulative boost with the addition of polycarbonate panels. Externally, residents are treated to a community pavilion and gardens created for neighbours to grow vegetables, watch movies and barbecue together. Despite everything, the project only cost $850,000 (£670,000) or £83,000 a unit to build, meaning construction is feasible and rents are affordable.

“It’s the three-storey hut that I’m really excited about,” EC3’s Edwin Chan told the Detroit Free Press. “It’s like a cathedral. By going up three levels, you’re able to have views of downtown Detroit, which the other huts don’t have.”

The project has been a critical success, receiving the 2017 Progressive Architecture Award from Architect magazine. Perhaps it’s because they point the way to affordable housing of the future.