As the world transitions to more sustainable energy sources, using steel-armoured cables to connect to areas of high sun activity could be the key to a shared, solar-powered future.

Despite the need to limit the impacts of climate change, the planet’s energy demands continue to grow. Areas such as Southeast Asia are set to see a massive 60% increase by 2040. This burgeoning growth in demand is accelerating the need for renewable electricity due to its lowering cost, particularly in highly industrialised economies like Singapore.

Relying on gas to generate 95% of its electricity, the rain-soaked island off the southern tip of the Malaysian peninsula is looking to increase the stability and sustainability of its energy systems, which it sees as critical to its economic competitiveness.

Singapore has a tropical rainforest climate, which features no distinct summer/winter season change, but has abundant rainfall and an even wetter four-month-long monsoon across November to February. In comparison, Australia instead boasts the second highest per capita solar resource in the world.

This abundance of solar energy presents an opportunity to export renewable power for use by nearby economies and this is exactly what the Australia-Asia Powerlink aims to do.

Sizzling in the arid region of Australia’s Northern Territory sits Powell Creek Telegraph Station. A site of historic and touristic significance, it was one of the linking points of around 3,000km of overland telegraph wire constructed in the 1870s that finally connected the remote country with the rest of the world.

One of the most consistently sunny places on the planet, Powell Creek will once again be a site of historic connection. But now instead of connecting Australia to its neighbours through the power of communication, it will connect Southeast Asia to the country’s bountiful supply of solar energy.

It is here on 12,000 hectares of sun-bleached bushland that the world’s largest solar farm and battery storage facility will be built. The region’s flat surface is perfect for the installation of solar panels, while its proximity to a major railway corridor provides easy site access for large scale equipment and labour.

Once completed, the AAPowerLink is expected to meet around 15% of Singapore’s electricity needs, as well as offsetting 8.6 million tonnes of CO₂ emissions per year. Construction will start in 2023, with the first solar energy transmissions expected to reach Singapore by 2027.

The facility’s solar panels, which are mounted on steel bases, will have a capacity of up to 20GW, with its battery system representing 36-42GWh of energy storage. Steel and stainless steel will be used throughout the farm’s pumps, tanks and heat exchangers. 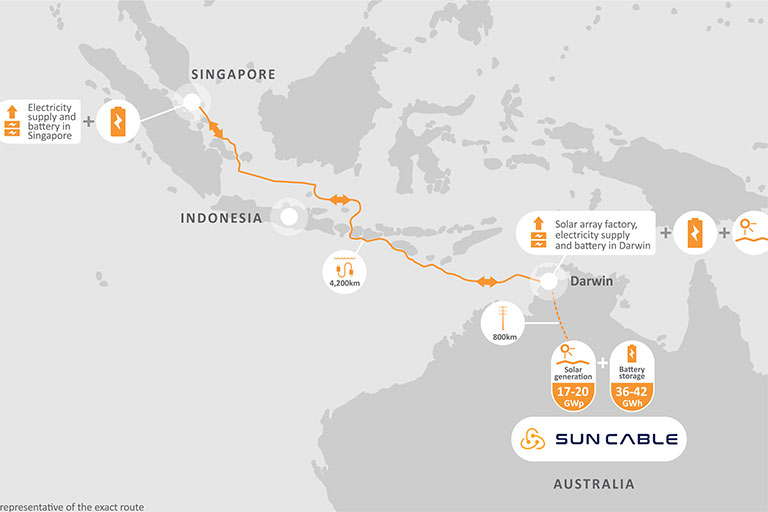 Connecting Singapore and the solar farm will be a 5,000km-long high-voltage direct current (HVDC) transmission system. An 800km-long overhead line will follow the railway corridor to Livingstone, close to the Northern Territory’s capital of Darwin, where a utility-scale battery will also be installed near the coast.

From there, 4,200km of underwater cable will stretch to Murrumujuk, on the Gunn Point Peninsula, to supply around 3.2GW of electricity per year. Here, on a 55-hectare site, a converter station and battery facility will receive the transmitted power and pass it on to Singapore.

The HVDC undersea cables use copper conductors surrounded by a series of layers, including lead alloy and polyethylene sheathes. To protect the conducting elements within, the cables are covered in galvanised steel wire armour. This allows the long cables to withstand the rigours of undersea installation and operation.

This project is the most ambitious of its kind and represents a sea change in the generation and transmission of renewable energy. Using the enduring power of steel to connect the ‘sunbelt’ around the earth with other parts of the world can play a key role in the transition to a more sustainable future.

Padma Bridge in Bangladesh is longest spanning the Ganges

The 6km-long steel-built Padma Bridge is a game-changer for Bangladesh, connecting 21 southwestern districts to the capital of Dhaka and boosting the country’s economy.

Expanding electricity access across sub-Saharan Africa is a mammoth engineering task that requires significant investment and a rethinking of what energy access means.