The World Steel Association (worldsteel) is a non-profit organisation with headquarters in Brussels, Belgium. A second office in Beijing, China, opened in April 2006.

It was founded as the International Iron and Steel Institute on 10 July 1967. It changed its name to the World Steel Association on 6 October 2008. The association celebrated its 50th anniversary in 2017.

Our relationship with international organisations 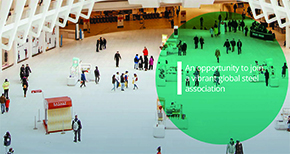 Our commitment, our key focus areas, our Committees and the many advantages of being a member of worldsteel. Click here to download the PDF document.

If you have a specific question for us, please contact the relevant member of staff.

Sign up to receive our e-newsletter. You can easily unsubscribe at any time.

This publication takes us through the years while recounting the major events that have marked worldsteel’s history from 1967 to 2017. Click here to download the PDF document.